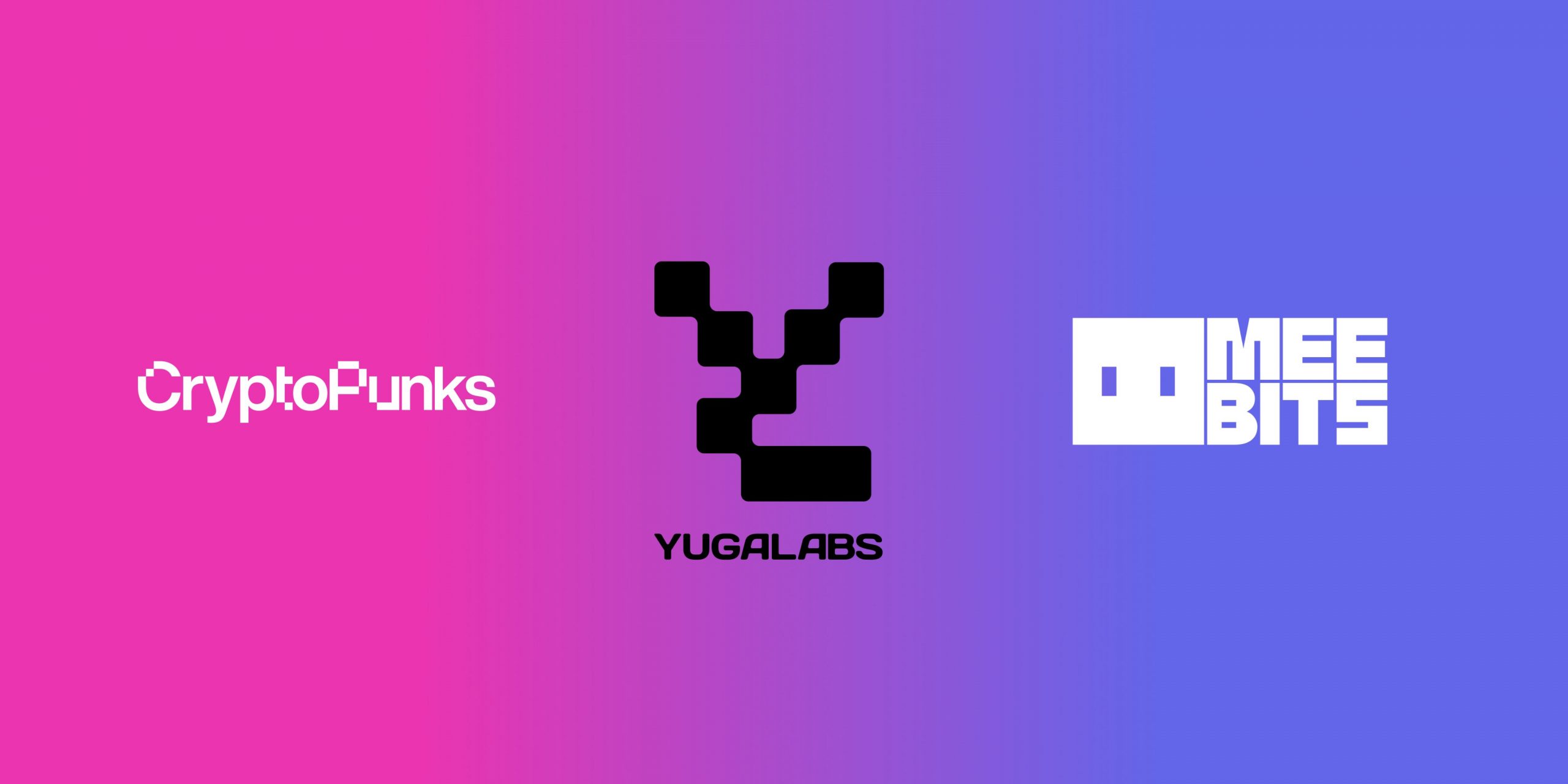 Just last Friday, Yuga Labs made a huge announcement: They will be acquiring CryptoPunks and Meebits from Larva Labs. Off the top of my head, that already sounds like a multi-million, even billion-dollar investment!? (ok, maybe that’s an exaggeration)

But why the acquisition of CryptoPunks, and why Yuga Labs? It isn’t every day that an entire NFT collection gets sold, I.P. included, to another NFT team.

In this article, we will be doing a full review of the merge of BAYC and CryptoPunks. Let’s dive right in!

For those clueless about what I was talking about earlier, here is some context.

CryptoPunks is an Ethereum-based NFT collection, consisting of 10,000 pixelated digital art tokens. The collection was launched in June 2017 by Matt Hall and John Watkinson, two software developers in Canada.

To date, CryptoPunks has been one of the most successful NFT projects, with total sales reaching 866K Ether ($2.4 Billion). As one of the earlier projects in NFT history, CryptoPunks was able to ride the 2021 NFT hype wave, reaching such a high price; it’s become more of a “status” thing than anything.

Larva Labs is the company behind CryptoPunks. In May 2021, Larva Labs launched The Meebits, a collection of 20,000 3D Voxel Characters, as a “sequel” to CryptoPunks. This collection has garnered over 200 million dollars in total sales, pretty great on its own too!

Bored Ape Yacht Club, BAYC in short, is a collection of 10,000 Ape NFTs on the Ethereum blockchain. Launching in April 2021 by an anonymous 4-ape strong team, BAYC rode the 2021 NFT hype as well, and is now the top NFT collection (in total sales) of all time.

Similar to CryptoPunks, BAYC is more of a status boost rather than an NFT collection to buy for utility. Nevertheless, BAYC has its exclusive club with multiple holder perks, including the highly successful Mutant Ape Yacht Club (MAYC) launch.

The team behind BAYC is Yuga Labs, and other collections such as Bored Ape Kennel Club and MAYC are also under the same founders. BAYC has accumulated around 440K Ether ($1.2 Billion) in total sales so far, about half that of CryptoPunks. But considering that their sub-collection MAYC has garnered around 240K Ether in total sales, this puts them not far behind Larva Labs.

Some big news to share today: Yuga has acquired the CryptoPunks and Meebits collections from @LarvaLabs, and the first thing we’re doing is giving full commercial rights to the NFT holders. Just like we did for BAYC and MAYC owners. pic.twitter.com/lAIKKvoEDj

It may come as a surprise, on first thought, why Yuga Labs would (or can) acquire CryptoPunks. After all, isn’t CryptoPunks “ahead” of BAYC in the spot for NFT king? Opinions aside, let’s break down what we know about this deal.

While Larva Labs still retain the rights to one of their other major collection Autoglyphs, two of the original projects are essentially out of their hands. Is this merely a sale of ownership, or an acquisition of Larva Labs? It’s hard to tell now (though Larva Labs claims it’s not the latter).

Finally, Larva Labs cite the reasons for selling I.P. of CryptoPunks and Meebits to Yuga Labs, because they would need people with “a different skill set” to continue growing. This, in my opinion, marks a shift in the direction of BAYC. More on that later.

In this piece of big news, there are three distinct points that some could miss. I think they’re all extremely important, so let’s break them down.

On 12 March, CryptoPunks stood at a floor price of roughly 70 Ether, while Meebits were going for a healthy 7 Ether per piece. I did the math, Yuga Labs essentially acquired over 41.5K Ether worth of CryptoPunks and Meebits, or over $100 million. That’s just insane!

Aside from the NFTs, Yuga Labs also got the I.P. for all existing CryptoPunks and Meebits. That certainly must have had intangible value, since the founders at Larva Labs never gave out commercial rights to their NFT holders.

Going down to the financial terms, is this sale a Merger, or an Acquisition? Well, it seems like a Merger has been ruled out, since the team behind Yuga Labs has clarified that members from Larva Labs will not be moving over to Yuga Labs, and will be continuing with other endeavors.

The Question of I.P.

I.P. is where things get interesting. I.P., also known as Intellectual Property, refers to inventions and artistic/literary works, or any form of intellectual work. They usually come with copyright and commerce rights, allowing the creator to use the piece for commercial purposes like advertisements or sell them on other merchandise.

However, copyright in NFTs is a controversial topic. Once you buy an NFT, isn’t the art yours, and hence your I.P.? Some artists claim otherwise, citing that although you can buy an artwork, the original I.P. still lies with the artist. For more on this copyright controversy, do read an article I wrote about this, and what the simple solution is!

Back to CryptoPunks, Larva Labs doesn’t attach I.P. rights onto their NFTs. They use something called the NFT License, where CryptoPunks holders can use their artwork for personal use, but not commercial use.

Instead, CryptoPunks signed with United Talent Agency for the sale of their I.P. rights to certain films and video games. Some of the punks from the collection will inevitably be commercialized, but the owners don’t receive a cent of royalties.

On the other hand, BAYC gives its holders full I.P. rights to their Bored Apes. They can advertise and commercialize apes they own, put them on beer cans, create merch, etc. However, the use of Bored Ape Yacht Club as a collective, is still not allowed.

But hey, we believe on-chain NFTs are still better. Here’s why.

From Yuga Lab’s POV, where do they stand to gain? In my opinion, this isn’t a profit-making move. Instead, it is a welcome gift from Yuga Labs to CryptoPunks and The Meebits holders. They have something bigger planned, for the future.

The Future of BAYC x CryptoPunks

Citing the founders of Larva Labs, the team behind BAYC has “a different skill set” to take the Punk and Meeb communities to the next level. What does this mean… aren’t CryptoPunks and BAYC just PFP projects?

They were, but I’m starting to get a sensing of a shift in direction of BAYC: To Utility.

The founders of CryptoPunks are software developers. Even when they created their second collection Meebits, the art is dope, but there wasn’t a clear link between the worlds of CryptoPunks and Meebits.

On the other hand, Yuga Labs have effectively linked their other NFT projects around the main Bored Ape Yacht Club. Take MAYC for example, where each BAYC holder was “airdropped” a serum, which when “applied” to their Bored Ape, would turn it into a Mutant Ape.

The Bored Ape Kennel Club was another collection of 10K “companion NFTs” to BAYC, airdropped to holders for free. Royalties off sales in the secondary market would go to charity. These are just some examples of how Yuga Labs were able to create new collections not just for the sake of it, but to expand the BAYC ecosystem.

So, why the acquisition? Perhaps, to expand the BAYC universe even further. With two of the most popular NFT collections joining forces, who’s to stop Yuga Labs from taking things to the next level? By the way, they are adopting a new token called ApeCoin… I already feel like it’s going to blow up!

There have not been many “acquisitions” in the NFT space so far. A notable one was Nike’s takeover of RTFKT studios, and then again that seemed like Nike’s venture into the metaverse.

When BAYC and CryptoPunks meet under one banner, this truly is a key moment in NFT history. It seems that the way forward is not fighting for who tops the OpenSea sales volume, but expanding the NFT-verse, together.

With the amazing team at Yuga Labs, along with each and every holder behind the BAYC and CryptoPunks ecosystems, it’s starting to look like NFTs are finally on the road to evolution: From PFPs, to Utility.